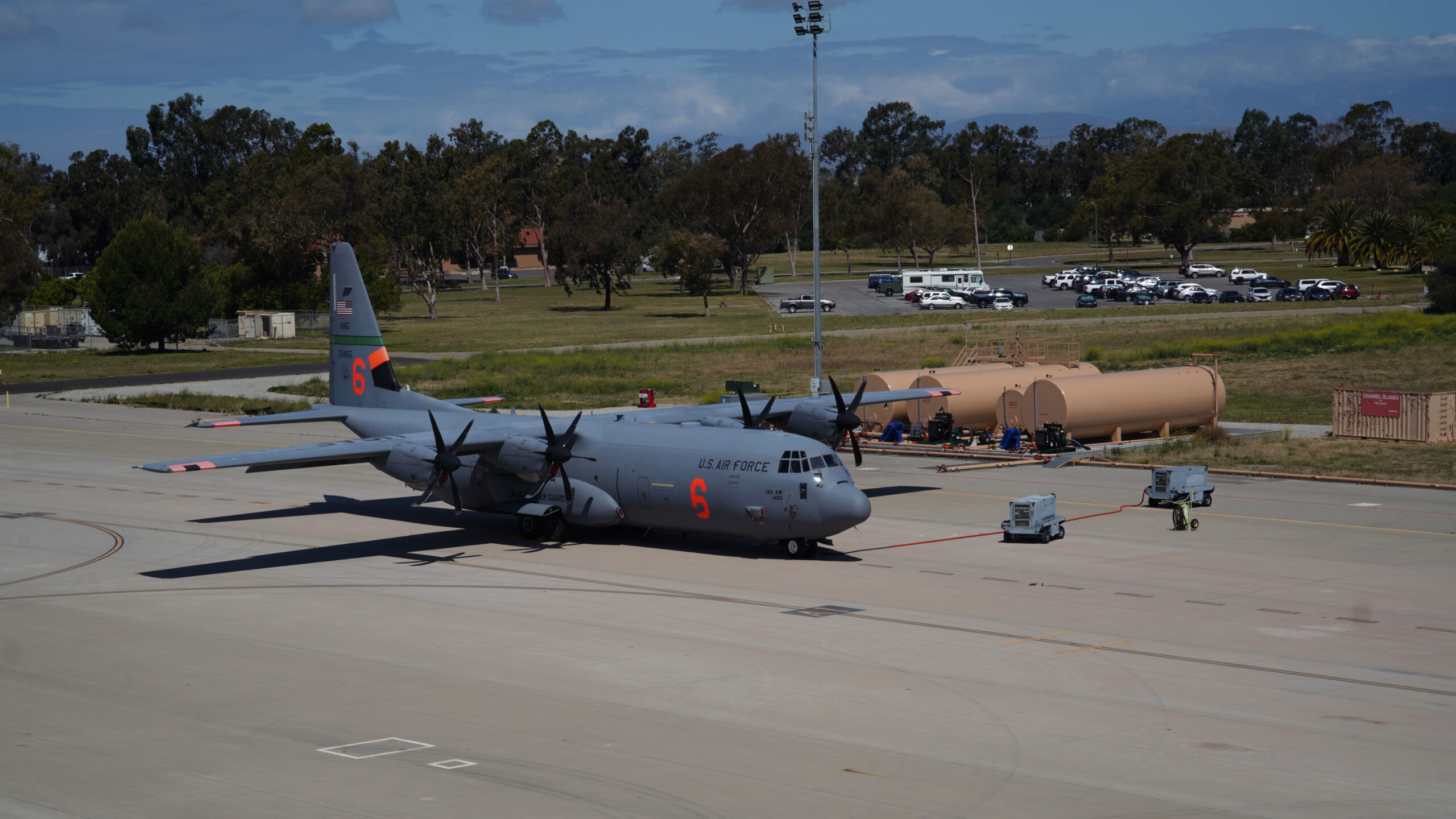 With the installation of the permanent ground tanks known as “MAFFS pits,” aerial firefighting agencies can now capitalize on the added benefits they provide, increasing the surge capabilities for all wildfire suppression agencies inside Southern California.

Previous legacy tanks at the 146 AW required the ground crews to stop producing retardant at 10,000 gallons. However, the newly upgraded MAFFS pits can expect to extinguish this issue when the wing finally showcases the fire retardant ground storage tank’s increased capabilities just in time for the next fire season. Another added capability of these upgraded MAFFS pits is the ability to provide fire retardant for Very Large Air Tankers (VLATs), a valued upgrade that will eliminate potential delays in reloading fire retardant for all aircraft involved.
Previously, the capacity with the older tanks could only allow for up to three fire retardant reloads before there would be a significant delay due to the ground crews having to mix more retardant. According to U.S. Air National Guard Lt. Col. Andrew Miller, an eight year MAFFS pilot with the 115th Airlift Squadron, the new tank’s storage size upgrade is a significant and exponentially larger storage size compared to the old system.

Miller, says he’s excited about the ground tanks’ increased storage capability and the significance of the tanker’s strategic location within Southern California, stating it’s a culmination of a true team effort with significant contributions from many members in the wing dating back to 2014.

“We will now have a much larger and faster capability to deliver retardant to the local area, as the ground tank size has increased five-fold from a 10,000-gallon capacity to 50,000-gallons. Beyond the volume increase, another added benefit is the new tanks are enclosed which means they can now have retardant on hand when the fires begin. One of the massive tanks uses circulating pumps to mix the water and powder, and the additional 25,000 gallon tank provides storage capabilities for the retardant, and has a built in buffer capability during high demand. Enclosed tanks also mean the retardant in the tanks can be stored for an extended period of time. They can provide the capability to deliver retardant even before the base is fully activated for operations,” said Miller.

“There are few tanker bases available in the Southern California region with the capability to support large-scale aerial firefighting. This meant that some reloading times for the MAFFS pits saw extensive delays. As a result, the MAFFS community saw a need for a more robust reload capability and came together to create a solution. Channel Islands Air National Guard Station was selected because of its strategic location and unique capability of filling in the void in this region. Channel Islands Airtanker Base is now the first Air National Guard base with a permanent tank capacity of over 10,000 gallons,” said Miller.

MAFFS is utilized as a surge capability for the Forest Service or CAL FIRE when commercial aerial firefighter units are unavailable. The 146 AW, Forest Service, CAL FIRE, and other Department of Defense MAFFS wings have all actively shared a strong partnership together. Through all of their combined efforts, they have forged many years of time-trusted, joint wildfire suppression operations dating back to the early 1970s.

These partnerships operate on a few principled factors, with each organization bringing valuable resources to the MAFFS mission. For example, the U.S. Forest Service, which owns the MAFFS units, provides the retrofitted system and purchases the retardant. Meanwhile, the DoD provides the C-130 aircraft, flight crews, maintenance, and support personnel to fly the missions. State wildfire agencies such as CAL FIRE also plays a large part in state activations as well, providing critical tanker base support that work in unison with the rest of the MAFFS community. An additional voice for the MAFFS community and deputy assistant director for fire and aviation for the U.S. Forest Service Kim Christensen says that the newly constructed MAFFS pits could ease logistic hurdles and improve the efficiency during a home station activation.

“We recognize the commitment the 146th Airlift Wing has made to the MAFFS program by making permanent modifications to their C-130 fleet to provide more efficient retardant deliveries when we need them the most. In the past several years, we have become increasingly more reliant on the surge capability of the MAFFS program, and these modifications will help us more efficiently support suppression efforts on the ground,” said Christensen.

“If the decision is made to activate the 146 Airlift Wing’s MAFFS, the Forest Service may request them to activate and support incidents from their home station. The agency can often reduce logistics and recognize efficiencies with a home station activation, and the permanent retardant pits at Channel Islands allow us to better support this,” said Christensen.

Mr. Ron Skaggs, a programs and integration requirements division chief for the National Guard Bureau with direct oversight of MAFFS pit project at Channel Islands says The National Guard’s investment in funding of the MAFFS pits has enriched both domestic and military operations efforts for the better.

“The fixed base pit project at the 146th Airlift Wing is a game changer for the wildland fire fighting community, not only for our Guard Airmen who are involved with the MAFFS mission, but also to our valued partners in the Forestry Service. By using the National Guard funding, the 146th was able to stream line the acquisition, installation, and operation of this important firefighting system,” said Skaggs.

“The new system is already online and ready to provide critical loading operations of fire retardant to firefighting aircrews in a safer, faster, and more precise manner. Air National Guard dollars have once again proven critical to our ability to procure good equipment for our Guard members, not only for our war fighting mission, but also for our Domestic Operations efforts here in the homeland,” Said Skaggs.