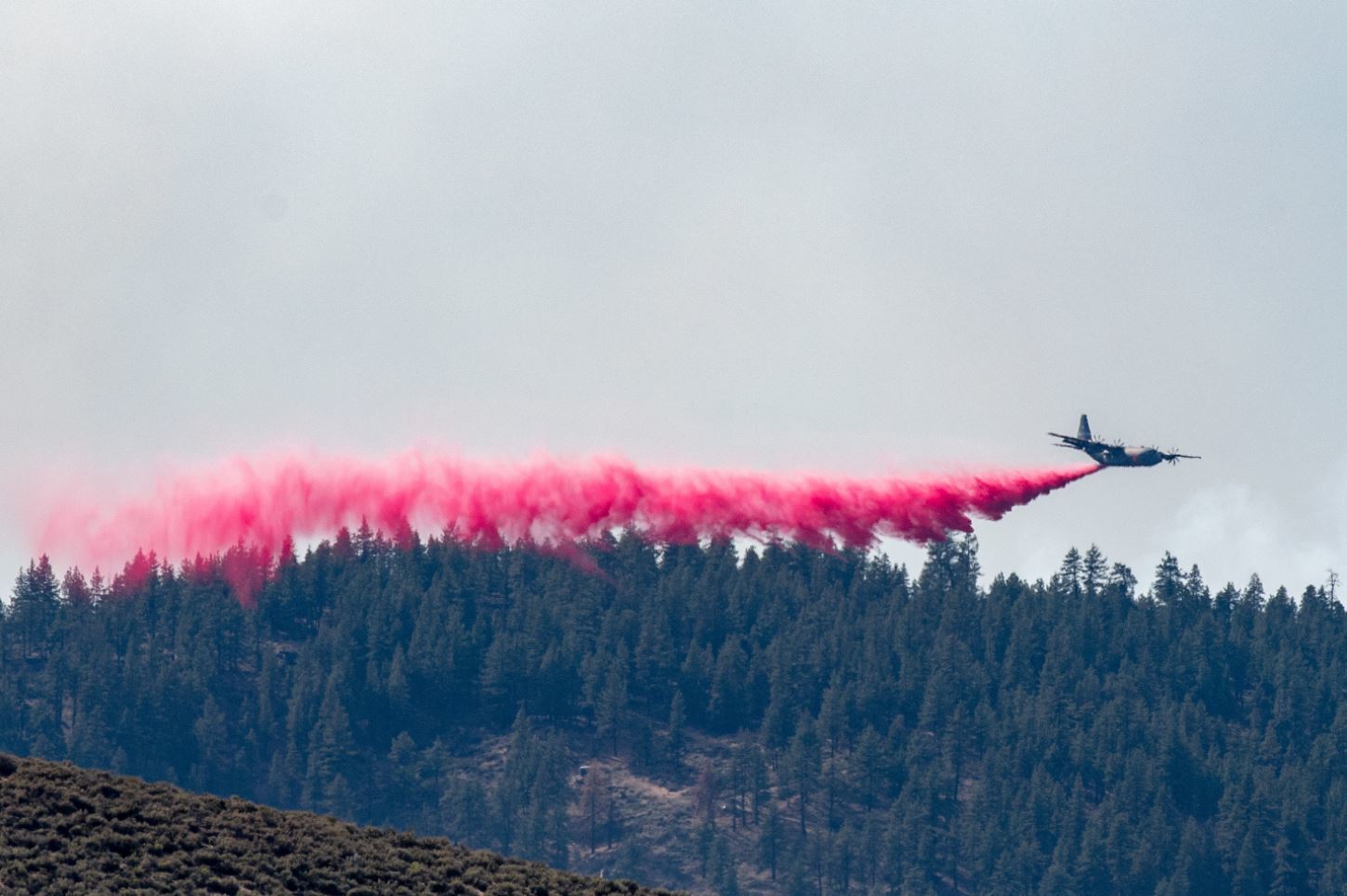 The Nevada Air National Guard Modular Airborne Fire Fighting System (MAFFS) crews finished up their 89-day MAFFS activation Sept. 22, 2021. They flew a total of 330 sorties and dropped 8,181,017 pounds of retardant (912,042 gallons). This was 36 percent of the total gallons dropped from the four-unit (8 aircraft) Air Expeditionary Group during this fire year. The remaining units finished their 96-day activation on Sept. 29.

“The Nevada Guard surpassed expectations this year,” said Col Gary Monroe, AFNORTH’s MAFFS 153rd Air Expeditionary Commander. “They were only anticipated to support for 60 days and they hung in there for 89 of the 96 days while providing solid maintenance for the aircraft and having aircrew with positive outlooks ready to go on a moment’s notice. They made a full 1/3 of the retardant drops and all this while getting ready for an upcoming deployment. Having eight aircraft available to NIFC for drops was possible because of the High Rollers.”

“The High Rollers once again remained dedicated toward the preservation of life and property,” said Lt. Gen. Kirk Pierce, commander, First Air Force, Air Forces Northern. “The unit flew under challenging conditions while being away from home about 25 percent of the year. I’m proud of their efforts and we are grateful to support the interagency team.”

“Our involvement in MAFFS this year, although was very busy, was quite satisfying to be such a huge part in getting these fires under control,” said Lt. Col. Michael Fugett, the 192nd Airlift Squadron commander. “I am so proud to have this rewarding mission, and have the chance to help our homeland and our fellow Americans.”

“The USDA Forest Service and other federal wildland fire agencies appreciate the continued military support through the MAFFS program,” said Kim Christensen, Deputy Assistant Director for Operations for the USDA Forest Service. “They provide a valuable contribution to our wildland firefighting efforts and we’re proud to have them working alongside us. We also appreciate their focus on safety in all aspects of their operations.”

MAFFS, Modular Airborne Firefighting System, is essentially a storage tank loaded inside the C-130 so it can drop up to 3,000 gallons of fire retardant through the rear aircraft nozzle in less than 10 seconds across a quarter-mile line. The MAFFS’s belong to the Forest Service while the aircraft are Air Force owned. Aircrews, maintenance crews and support personnel undergo special NIFC training and certification to perform these missions each year.

“The MAFFS mission is unique in that we work with civilian agencies to do a domestic mission at home,” said Lt. Col. Todd Hudson, a mission commander for the 152nd Airlift Wing MAFFS crew. “Normally—when we’re deployed, we work for the Air Force–in this case, we are working with local United States Forest Service and CAL Fire, we’re working directly with firefighters on the ground and in the air above making a difference protecting areas often times right here in our own area.”

The C-130s were operated out of McClellan Air Tanker Reload Base in Sacramento and the tanker base in Redding, Calif. From there, they assisted federal and private firefighting assets around the region as they were needed.

This mission is intense but satisfying for the Airmen involved.

“We’re on a 2-week rotation here and the biggest challenge is the long days, we’ve had quite a few 16-hour days,” said Tech. Sgt. Michael Goldsworthy, from the Guidance and Control Shop in the 152nd Maintenance Squadron. “We don’t really have any days off, fires don’t really take days off. By the time we’re fixing planes usually the sun’s going down. The mission is quite fulfilling though, I’ve deployed and supported a ton of training missions and with the MAFFS mission you come out here and you feel like you’re actually making a difference in people’s lives–fighting wildfires and saving houses, it really makes you feel good.”

According to the National Interagency Fire Center as of October 8, “46,925 fires have burned 6,423,804–there are still 45 active large fires burning in 9 states burning 2,826,806 acres. Large fire activity is beginning to moderate throughout the country except for the northern Rockies and southern California. Widespread moisture is expected in the next few days across the West, which will help firefighters reach their containment goals. One new large fire was reported in Idaho. The majority of large fire activity is occurring in California, Idaho, and Montana.”

Seeing the difference made in people’s lives is rewarding to the High Rollers involved.

“A couple years ago we were making drops on a small town in northern California–so small that they don’t have their own mailboxes,” Hudson continued, “They have a community post office, so the citizens took pictures of MAFFS units dropping right in their back yards and they blew up some of the photos and made a collage and hung it in the post office and then as people came to get their mail, they would sign the poster–they brought that poster to us and gave it to us as a ‘thank you’ for saving their homes. That is feedback that you do not get from any sort of deployment—and it is very very rewarding and that’s how you know you made a difference.”

“This is my 28th year and I have been on deployments all over the world to several continents, and we feel great because we know we have worked hard and we know we’ve made a difference but it’s hard to see the tangible difference, it might not come for 5 years or something, depending on the conflict,” said Hudson, “In this case, when we go and build a line of protective retardant around a house and the next day when we come back and we see that the fire has gone by and that house is still there, then we know we made a difference that day.”

If additional MAFFS support is required this season, the crews and planes can be activated within 48 hours.